What did Title IX changes just do for trans students? 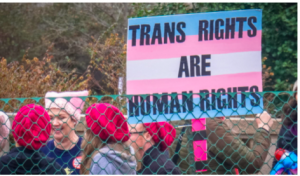 Last month, the Department of Education issued a new interpretation of Title IX, extending protections to transgender students and rejecting the direction that had been taken by the Trump administration.

LGBTQ+ students often face disproportionate bullying, harassment and victimization — which has been exacerbated during COVID-19. While learning remotely, students haven’t had access to school-based mental health services and other supports. Over the past year, 42 percent of LGBTQ+ youth seriously considered suicide and 94 percent said politics has also impacted their mental well-being, according to  the Trevor Project, an organization dedicated to suicide prevention among LGBTQ+ youth.

“The Department makes clear that all students — including LGBTQ+ students — deserve the opportunity to learn and thrive in schools that are free from discrimination,” U.S. Secretary of Education Miguel Cardona said in a statement.

What is Title IX? And what does it mean to “interpret” a statute?

Title IX of the Education Amendments, enacted in 1972 and signed into law by former President Richard Nixon, prohibits discrimination on the “basis of sex in any education program or activity offered by a recipient of federal financial assistance.”

What does the Department of Education’s recent clarification mean for transgender students?

Rodrigo Heng-Lehtinen, the deputy executive director of the National Center for Transgender Equality, said that it was already illegal to discriminate against transgender people, but that the particulars of who was protected under Title IX were heavily contested.

There are no upcoming events.